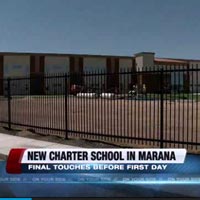 See Video »
MARANA, Ariz. (KGUN9-TV) – The first day of school is approaching fast and a new charter school in Marana is putting the final touches on its campus before the big day.

The Leman Academy of Excellence, located near Cortaro and Silverbell, will open its doors officially to students on Monday, but the staff spent all of Thursday getting the school ready.

While workers put the finishing touches on the playground area outside the school, teachers and staff were busy inside preparing classrooms.

“We’re in the sort of touch up, clean up phase,” said Dennis O’Reilly, head of schools at the Leman Academy of Excellence.

O’Reilly says this is the first tuition-free charter school in the Tucson area that follows the Classical Education program. Part of the curriculum at the K-6 school includes teaching foreign languages at a young age and encouraging students to ask questions.

“They’re going to be in for a treat,” said O’Reilly. “They have no idea what’s waiting for them and I mean it. I have a great faculty and staff, our program bar none is one of the best and that’s why I chose it.”

The school will hold an open house Friday inviting students and parents to meet their teachers and see inside the school. O’Reilly says they have about 550 students enrolled but still have spots open at each grade level.

He also says they’ve received a lot of community support since construction began on the school in March.

“I think it’s because the town has embraced us and wants us here and were glad to be here,” said O’Reilly.