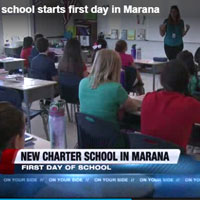 See Video »
MARANA, Ariz. (KGUN9-TV) – The first day of school started for scholars in Marana and Sahuarita on Monday.

But, even the teachers and staff at one new charter school was feeling the nerves, as well. The Leman Academy of Excellence started construction in March of this year, but it already opened it’s classroom doors for the fall school year.

Rachel Hallett’s two girls are among the very first group to attend the Leman Academy of Excellence, but they still were pretty nervous about starting at a new school.

“Everyone is starting their first day, so everyone is looking for friends today,” said Hallett.

Back in March, the school had just begun construction and four months later, the school made its debut as the first tuition-free charter school in the Tucson area that follows the classical education program.

Dennis O’Reilly with the Leman Academy of Excellence said the curriculum remains connected by keeping subjects and time period together.

The academy is founded by Dr. Kevin Leman and also includes teaching foreign languages at a young age and encouraging scholars to ask questions.

“What happens is they start critically asking the good questions, analyzing things and asking why, said O’Reilly.” So, your sort of building off how a child naturally develops for themselves.”

The parents dropping off their kids today tell KGUN 9, they think this first day is a great first step in their child’s learning.

“I just think it’s a better education – they learn a lot more in vocabulary and phonics and grammar. They just have a really good foundation and then it carries them through their SAT’s and all the way through to college,” Hallett said.

If you would like to enroll your child, O’Reilly tells KGUN 9, there are still spots open for this school year. Click here for more information.