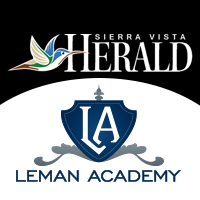 SIERRA VISTA — A new charter school is slated to open this fall in the former Imagine Charter School building on Wilcox Drive.

The Leman Academy of Excellence, named for founder Kevin Leman who is also a best-selling author and psychologist, first opened its doors to kindergarten through sixth graders last year in north Tucson and is now set to expand to Sierra Vista. It will fill the 31,269 square-foot location, with a capacity for about 500 students, that Imagine Schools shut down at the end of the 2013-14 school year.

“If the school (in Sierra Vista) sees a fraction of the success as the one in Tucson, the people of Southern Arizona will be very happy,” said Leman, who has written more than 50 books on parenting, marriage and family, and is a regular speaker at events, as well as on radio and television. “There’s a nice building down there, a great building, and we can use that.”

Leman said the school in Tucson currently has an enrollment of about 550 students and is in the process of constructing its third building on campus so it can welcome nearly 1,000 students next year. Seventh-grade classes will also be added in the fall, as well as a pre-school, and eighth grade is on track to come in the following year.

Sierra Vista’s location is planning for about 400 students initially and will also start out as a K-6 school, with plans to expand to seventh and eighth in subsequent years, and follow the “Classical Education” model that emphasizes a three-fold approach as students mature: grammar, logic and rhetoric. Grades K-5 begin with the building blocks of learning by utilizing memorization. Grades 6-8 are encouraged to ask “why?” Older students are encouraged to synthesize information and express themselves across a wide range of disciplines.

“Kindergarteners learn Spanish, third graders study Latin, sixth graders understand logic,” Leman said, adding that music is often used as a tool in memorization. “It’s a very unique way of teaching kids. We push the bar, we expect the best of kids. We expect them to perform in the classroom, be kind to one another and understand the school is not just fun and games — but fun is very much part of our style and how we teach kids in the classroom.”

The academy’s head of schools, Dennis O’Reilly, will be the acting principal at Sierra Vista’s location to get the school off the ground. He said the academy’s overall goal is to open up a school at a new location each year, with the next one possibly slated for Colorado if the paperwork goes through this summer.

“As each school opens, my charge is to be there and make sure the culture gets established, programs get started in the right manner, and our professional development training is done correctly,” he said. “Our three main draws are Dr. Leman, classical education, and partnering with the home — opening the door and letting parents be truly involved.”

Leman was last in Sierra Vista “years ago” as an instructor for graduate courses in counseling and teaching through the University of Arizona’s extension program. He said he’s thrilled to come back next week for the school’s first of several information sessions, beginning at 6 p.m. Monday in the gym of the school’s future location at 1000 E. Wilcox Dr.

And, he said, expect him to be a regular face at the school once it’s open.
“I talk a lot about Vitamin E: Encouragement. You walk into our school and see pictures of kids who have been voted ‘encouragers.’ In this day of bullying and putting down, we encourage being kind to one another,” he said. “But kids also need Vitamin N, which is ‘no.’ We have expectations, we have a dress code, and we set the tone for that.”

Leman’s quest to start a school started over a simple cup of coffee, and less than two years later he was “welcoming parents to the school.” He’s one of those people who remembers a teacher making a difference in his life by encouraging him to aim higher.

“We’re very selective of who gets to teach in our schools. They better have a love of learning themselves. I don’t want teachers who know everything — I want teachers who are still learners,” he said. “We’re going to set the standards high, teach these kids and make a difference. Can I change the world? No. But I can make a dent in American education.”